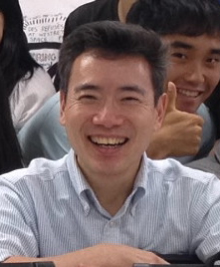 According to my passport I am an American but I do not completely identify myself as an American. There are several reasons for this. First, I've lived most of my life abroad, 45 years to be exact. Second, English was not my first language. In fact, I spoke very little English until I enrolled in an international school in Japan, where I associated with English-speaking classmates and friends. The main reason that I don't think of myself fully as an American is because when I was living in the United States I felt like a foreigner. I didn't seem to fit in when I interacted with the people there. After some years, I discovered I felt most comfortable in a cross-cultural environment, composed of people from diverse international backgrounds. As a result, I returned overseas. At present, I enjoy developing friendships with expatriates and people of the host country, sharing stories about international experiences.

I have a Japanese name and I've lived in Japan for a long time. However, I am an American. My great grandfather was born in Yamaguchi Prefecture. In 1894, he and his wife emigrated and worked in Hawai'i. They returned to Japan but his oldest son, my grandfather, remained in Hawai'i with his family there. His oldest son, my father, was also born in Hawai'i. In Japanese, I am a 日系四世。My family history is interesting because it follows some important events in world history such as the Meiji period, World War II and Showa period. As a result, I designed a history course about Japanese Americans.
I am an American but I was born in Nigeria. How is that possible? Although I was born outside of the United States I was a citizen by birth because my parents were also Americans. After Nigeria, I lived in Turkey, Japan, Indonesia, Brazil and Thailand. By the time I entered college I had lived in seven countries. Through my overseas experience I learned many things about each country such as languages, customs, foods and so on. For these reasons, I designed a course about understanding cultural differences.

I once read a quote from a popular humorist that "it is sometimes better to ask some of the questions than knowing all the answers." For many years, based on our schooling, we have been trained to give answers to teachers' questions, but have you ever thought about finding answers to your own questions? Sometimes the most important questions originate from your curious mind. If you are curious and have the courage to pose your own questions, then attending university is one way towards proceeding with your discovery. So, why don't you come to Keisen University?